Like all the churches in the Tampa Bay area, St. John Greek Orthodox Church finds its roots in the Cathedral of St. Nicholas in Tarpon Springs. Founding families of the church included many who originally settled in Tarpon Springs and later migrated over to Hillsborough County on the east side of Tampa Bay. Many parishioners to this day were raised in Tarpon Springs and many of the members of the church have a special affinity for the Cathedral. To learn more about the History of the Greek Community in Tampa, check out this document, “A Social-Ethnic Study of the Greeks in Tampa: Beginning in 1887.”

St. John Greek Orthodox Church of Tampa, Florida is the second oldest community in the Tampa Bay area. A community of Greeks was established in Tampa long before the church was founded. In the early 1950s, services were held in the American Hellenic Center in Downtown Tampa and in various local Protestant churches. The church community was founded in 1956 with the laying of the cornerstone of St. John Greek Orthodox Church on January 7, 1956. The church was opened later that same year, by the 30 families that made up the parish. The story of how the community got the name Saint John is quite interesting. Many of the founding members of the community had the name “John.” Some were named for St. John the Baptist, others for St. John Chrysostom, and others for the many saints of our church who have the name John. Unable to decide which St. John to choose for the name of the church, without wanting to offend anyone, the community just stuck with the name St. John. However, when the Iconostasion of the church was built and decorated with icons, in the place where the icon of the church’s patron saint goes, the icon of St. John the Baptist was placed. After the church was built, a small hall and administration building were built. And in the early 1980s, a large community center housing a kitchen and gymnasium was built. It was later named the Kourmolis Center in honor of Archon Peter Kourmolis and his wife Sophia. During the 1970s, and extensive iconography project was done in the church, so that nearly every bit of the church walls is covered with iconography.

As the church continued to grow along with the Tampa Bay area, St. John helped provide liturgical and clerical support in founding two of its sister parishes in the area—St. Sophia in Winter Haven and St. Barbara in Sarasota. In the mid-1980s, the parish established the Junior Olympics. This event, now in its 20th year, is held each June and brings together Orthodox youth as participants in a number of field events, such as swimming, soccer, basketball, volleyball, and culminates in an awards ceremony for individual and team honors. Nearly 200 GOYAns and advisors from the Tampa Bay area churches, as well as most of the Greek Orthodox Church communities of Northern Florida participate each year. His Eminence Archbishop Iakovos consecrated St. Johns’ in 1987, with their Graces Bishop John of Atlanta and Bishop Iakovos of Catania as co-celebrants. Over the years, many prominent Orthodox clergy visited Tampa, including the late Patriarch, His All Holiness Patriarch Athenagoras, when he served as Archbishop of North and South America. Because the feastday of St. John the Baptist falls the day after Epiphany, the Archbishop of America has made pastoral visits to the church in January. His Eminence Archbishop Iakovos made many such visits, and His Eminence Archbishop Demetrios has visited the church as well. The Philoptochos Chapter of Saint John is large and active.

Throughout the years, they’ve held many fundraisers to support local charities, help fund parish programs, as well as programs for the Metropolis of Atlanta. The Philoptochos provides the hospitality committee which welcomes new members to our church. They have published a cookbook, A Taste of Heaven, and take the lead in many of the spiritual and fellowship programs of the church. Father Stavros Akrotirianakis has served as the Proistamenos of St. John since September 2004. The Church today has a membership of 391 families (and growing) of various ethnic backgrounds. There are ministries for all ages, including a Sunday school of over 200 students, altar boys, a youth choir, HOPE/JOY, GOYA, Young Adults, OCF (college ministry), five Bible studies, adult choir, chanters, ushers, Philoptochos, Young at Heart (Seniors), 3 dance groups, community outreach (feeding the hungry), a food pantry and many others. St. John hosts the Annual GOYA Lenten Retreat, as well as the Junior Olympics for GOYAns of the Tampa Bay area. Father Stavros hosts two adult retreats (in Advent and in Lent) as well. The Prayer Team is a ministry where members receive a daily reflection from Fr. Stavros. A full liturgical schedule and an outstanding choir are some other things in which this community takes pride. Like our patron saint, St. John the Forerunner and Baptist, we hope by God’s grace to be able to preach the word of God to the Tampa Bay area. 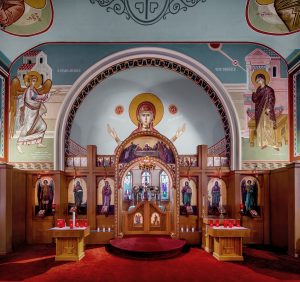